1UP, also known as Extend, is an item that gives the player an extra life. In most games it has the shape of a mini Arthur or Arthur's bust.

The extra life has the appearance of a small Firebrand. It is named Talisman of the Cyclone in Gargoyle's Quest and Power of Maelstrom in Gargoyle's Quest II. In Japanese games both are named Power of Darkness (闇の力 Yami no Chikara). They can be bought in towns, but the further Firebrand advances in the game, the more Vials it takes to buy them, towns sharing the same price. They can also be found in some vials on the overhead view map and in some stages.

Extra life is a Death Coin that allows Maximo to be revived by Grim. 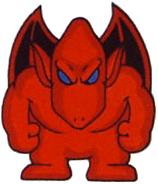 Talisman of the Cyclone (small Firebrand) in the menu.

A Talisman shop. This room is the same in each town.
Add a photo to this gallery

1UP article in Wikipedia

Retrieved from "https://ghostsngoblins.fandom.com/wiki/1UP?oldid=6037"
Community content is available under CC-BY-SA unless otherwise noted.