Start a Wiki
Arma, known as Alma (アルマ Aruma) in Japan, is an antagonist from Demon's Crest. Arma was born after the war of the Crests with rare attributes. Being a relatively young demon with thriving vigor and blessed with strong wings and innate magic, he caught the eye of Phalanx, who added him as aide to his mercenary troops. Arma achieved exceptional success in a short period of time, and was soon honored by Phalanx with the position of general and regarded as one of the strongest demons in the Demon Realm, being often compared with the red demon Firebrand. Due to his high pride, he desires to confront the crimson demon.

If the player finishes the game without fighting Arma for the third time, Arma mentions that he didn't expect that Phalanx would be defeated, and as the one that defeats the king shall rule, the next time may be his turn. 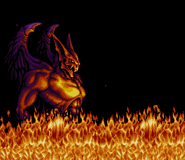 Arma in one of the game's endings.

Arma sprite
Add a photo to this gallery
Retrieved from "https://ghostsngoblins.fandom.com/wiki/Arma?oldid=6909"
Community content is available under CC-BY-SA unless otherwise noted.