Playable
Arthur (アーサー Āsā) is the main protagonist in the Ghosts 'n Goblins series, a brave knight that ventures into the depths of the Demon Realm to rescue his beloved Princess Prin Prin, who gets captured by Satan and other demons in each game. His main equipment is a steel Knight Armor, which he loses when damaged, and a Lance that he throws at enemies.

Story
The princess is kidnapped by Satan and Arthur has to fight through the Demon Realm to save her, eventually defeating their leader Astaroth and rescuing the princess.

Gameplay
Arthur wears steel armor and has five unique weapons to defeat his enemies. He loses his armor with one hit, and the following hit is lethal. The series was well known for its extreme difficulty and each game definitely proves that point.

Story
Set three years after Astaroth's defeat, Lucifer becomes the ruler of the Demon Realm and takes away the souls of everyone in the kingdom, including Princess Prin Prin's. It's up to Arthur to save his Princess again, and return the souls back to the people of the kingdom. However, he requires the Psycho Cannon to stand a chance against Lucifer's power. After Lucifer's defeat, everyone's souls returns to their bodies.

Gameplay
Pretty much the same as the first, with some upgrades. Arthur has a bigger arsenal of weaponry, and the Golden Armor is introduced, which can be worn to make the current weapon more powerful. While wearing the Golden Armor, Arthur can use a charged attack more powerful than the basic weapon. Arthur can also aim upwards, and can aim downwards while jumping.

Story
Knowing that Lucifer would eventually revive, Arthur decides to travel in search of a weapon powerful enough to completely extinguish him. After 4 years and some months, the reconstruction of Arthur's kingdom is complete and everyone celebrates. Hearing about it, Arthur rushes back and has a joyful meeting with the princess. Being reunited for the first time in years, the two strongly hugged each other. Unfortunately, at that time, the princess is suddenly taken away to the Demon Realm. Arthur was surprised, as it was too early for Lucifer's revival, but realizes that someone else must be responsible for it. Taking his lance, Arthur departs alone to the Demon Realm in order to rescue the princess and stop this new menace, the Demon Emperor Samael. Samael can only be defeated by a holy weapon that the princess had, and Arthur must find it before facing him. After obtaining the Goddess' Bracelet, Samael is defeated and the princess rescued.

Gameplay
Once again, the same gameplay is used, and like the previous game, it has more upgrades. Arthur can obtain a Bronze Armor, which makes his weapons more powerful, and can also obtain the Golden Armor, which makes his weapons even more powerful. Like the game before, he can charge up for a very powerful attack. Arthur loses his ability to aim up and down, but makes up for it by gaining the ability to double jump, a first in the series.

Story
The princess is kidnapped again, this time by Hades, and Arthur must return to the Demon Realm to rescue her.

Gameplay
The same gameplay returns, with more upgrades. At first, Arthur can only aim up and down like Ghouls 'n Ghosts and dash, but as he advances he gains more abilities, like double jump. New weapons, armors, shields, and magic powers are available for him, three of them enabling him to fly.

The princess in kidnapped by Azazel, and Arthur goes to her rescue.

In this game Arthur is a 32 years old king from England that wears a golden robotic armor of 210 cm able to hover, making him an one man army. His main weapon is named Gunlance Excalibur.[7] He is the most powerful playable character, but also the slowest due to the weight of his armor.

Arthur is a playable character.

Real Name: Arthur
Occupation: Knight
Abilities: Can rapidly hurl spears, swords, etc. towards his enemies. When wearing gold armor, he gains the ability to use magic.
Weapons: His inventory includes large lances, swords, fire bottles, bombs, boomerang scythes, the Swallow Blade, vine whips, etc.
Profile: The legendary knight who jumped into the demon world all by himself to save the princess who had been kidnapped by Satan. While best known for his dauntless courage in the face of terrifying monsters and life-threatening traps, he also enjoys wearing strawberry-print boxer shorts. Though he looks like an old man, he's really only 28 years old.
First Appearance: Ghosts 'n Goblins (1985)

Arthur first appears in the end of Chapter 15, where the Soul Edge teleports him from Joilant to Ibis Island. In Chapter 19 he is found by the party and joins them, helping to defeat several villains such as Astaroth, Nebiroth, and Red Arremer Joker.

Arthur uses many of his weapons to attack at any range. When attacking from distance, his special has him wearing the Golden Armor to attack with the Thunder, Wind, and Fire Dragon magics. When at close range, his special is a hit from the Psycho Cannon.

He has a Multiple Assault with Gil and Ki, where Ki casts Heat Body on the two knights and each proceeds to attack an enemy, and Ki finishes by casting a fire magic on the enemies. After the assault, Arthur's Heat Body is still active, causing his armor to overheat and break.

Arthur first appears in Prologue 4 to assist in the battle against Riemsianne, but disappears after the battle when Riemsianne teleports him, Toma and Cyrille to an unknown location. Later, he is found in Chapter 15 captured by Astaroth in the Gain Ground system alongside Lady. After his rescue, Arthur joins the group and helps to defeat several villains, including Astaroth.

Arthur is a Solo Unit that accompanies a Pair Unit. When called on, two of his lances come flying in from offscreen, then Arthur himself enters as he hurls a scythe and then an axe. Following that, he fires with a crossbow, throws a blue torch, and then jumps while dropping a red torch onto the enemy. As he sails overhead by double jumping, he throws three daggers down while landing on the other side of the target. After hurling two blades into the enemy's backside, he leaps into his Golden Armor, dons it, and unleashes his Thunder Magic attack, which causes his armor to burst apart, sending him flying away from the battle.

Arthur is the main character from this manga based on Ghosts 'n Goblins.

Arthur is one of the crossover event from Hauro Saito, one numerous video game characters.

Arthur appears in this crossover event from Archie Comics as one of numerous Capcom and Sega characters.

Arthur makes a brief appearance in the third episode of the anime and manga, "speaking" to the protagonist Haruo through a Ghosts 'n Goblins cocktail cabinet.

Arthur was revealed to be a DLC costume for the Mii Swordfighter on March 4th, 2021, and was released later that day alongside the new DLC characters Pyra & Mythra. He was also shown elsewhere to be a Spirit gifted to any players who had save data for Ghosts 'n Goblins: Resurrection on their Switch system. He will be available for in-game purchase for all players at a later, unspecified date. 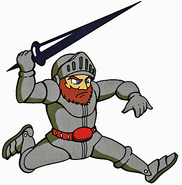 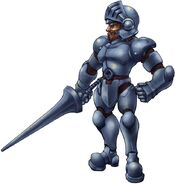 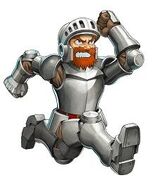 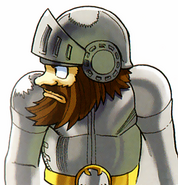 Soki's ending in Tatsunoko vs. Capcom 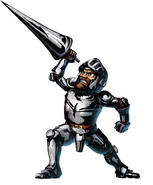 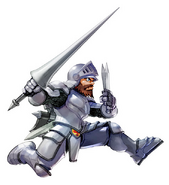 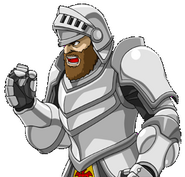 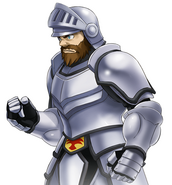 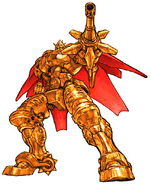 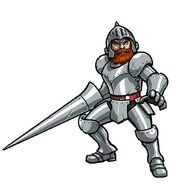 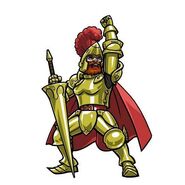 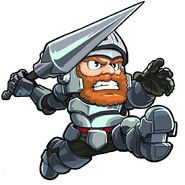 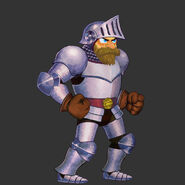 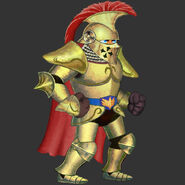