Bellzemos can split into four Dreadwings and than reappear through one of the small flies. He can also shoot a fireball, in his large form only though.

Though touching the Dreadwings hurt, Firebrand cannot damage them. Only his big, true form can be harmed. In the fight there is no floor, until it is defeated.

The name Bellzemos appears to be a combination of Beelzebub (ベルゼブブ Beruzebubu) and moth (モス mosu). In Christian demonology, Beelzebub is one of the seven princes of Hell according to Catholic views on Hell. The Dictionnaire Infernal describes Beelzebub as a demonic fly who is also known as the "Lord of the Flies". 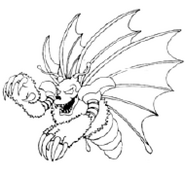 Bellzemos (split)
Add a photo to this gallery

Retrieved from "https://ghostsngoblins.fandom.com/wiki/Bellzemos?oldid=7509"
Community content is available under CC-BY-SA unless otherwise noted.