Breager (ブレーガー Burēgā) is the king of destruction, a powerful demon lord from unknown origins that arrived to the Ghoul Realm twice to wreack havoc with his Black Light. This giant demon with four arms controls a large army with his psychic power. However, in both times he appeared, he was stopped by the Red Blaze.

In Gargoyle's Quest, King Breager will make an offer to Firebrand before the battle. Regardless of the answer, the battle against Breager will start, but if the player chooses "YES", Breager will take all of Firebrand's powers away, making the battle unwinable as Firebrand will be unable to jump high enough to reach Breager's head. Similar to Lucifer, Breager stays in the center of the area and releases energy spheres from his hands. He can only be damaged in the head, and only when his top arms are lowered, otherwise the arms will defend the head.

Breager's summoned "spark", as pictured below, in the fight, can be canceled by Darkfire. 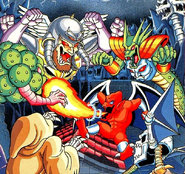 Add a photo to this gallery
Retrieved from "https://ghostsngoblins.fandom.com/wiki/Breager?oldid=7166"
Community content is available under CC-BY-SA unless otherwise noted.