Claw (クロー) is one of the fire powers that Firebrand obtains in Gargoyle's Quest, Gargoyle's Quest II and Demon's Crest. It is mainly used to shoot a ball of lava[1] at spikes, which dry and makes a place to grab onto, allowing Firebrand to Hell Climb spiked walls and reach new areas. It doesn't last on the spikes for long though, so Firebrand must move fast before the improvised wall disappears.

In Gargoyle's Quest, Firebrand obtains Claw after retrieving the Candle of Darkness from the Desert of Destitution. It is stronger against enemies, but cannot damage Lucifer (Rushifell) or King Breager. It is the ball shaped icon in the menu.

Claw in Gargoyle's Quest, the ball shaped icon is the menu.

After firing a Claw shot on spiked walls, Firebrand can grab the area for a short time. 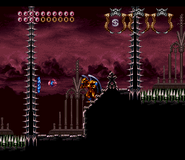