gain powers based on element

The Crests, known as Blazon (紋章 Monshou) in Japan, are magical stones present in the game Demon's Crest. One day, six magical stones fell from the sky, each with a color and crest representing their power. Whoever possesses those crests gains powers based on their element. A long time ago, there was a war for their possession. Firebrand managed to collect most of them, but they are stolen by Phalanx, who becomes the new ruler of the Demon Realm.

Years later, Firebrand regains the crests and their powers, and what he does with them depends on the ending the player obtains.

The Crest of Fire (火の紋章 Hi no Monshou) is a red stone that allows the owner to control fire. Firebrand has a piece of the fire crest in the beginning of the game, allowing him to use Fire. As the player proceeds, other parts of the crest are obtained, unlocking the Buster, Claw, Tornado, and Demon Fire powers.

The Crest of Earth (地の紋章 Chi no Monshou) is an orange stone that gives the owner great strength. When used by Firebrand, he transforms into Ground Gargoyle (Ground Arremer in Japan), enabling him to do a tackle dash and break some obstacles. In this form, his attack becomes Tremor (トレマー), a flame that travels on the ground. The flame still goes straight ahead if used while jumping.

The Crest of Air (気の紋章 Ki no Monshou) is a purple stone with the power to control the wind. When Firebrand uses it, he becomes Aerial Gargoyle (Aerial Arremer) and is able to rise to great heights while in the air. His attack becomes Hurricane (ハリケーン), a cutting wind.

The Crest of Water (水の紋章 Mizu no Monshou) is a blue stone with water powers. When used by Firebrand, he morphs into Tidal Gargoyle (Tidal Arremer), being able to swim underwater, water being hazardous for him in other forms. His attacks becomes a water Stream (ストリーム).

The Crest of Time (時の紋章 Toki no Monshou) is a green stone that grants the owner the power to go back in time. Firebrand becomes Legend Gargoyle (Legend Arremer) with it, improving his attack and defense. Due to his harder body, he takes less damage, and his headbutt attack is improved. His attack turns into the powerful Dark Flare (ダークフレア).

The Crest of Heaven (天の紋章 Ten no Monshou) is a light blue stone with power over the heaven. It was originally owned by Somulo before Firebrand took it from him, and shortly after it is stolen by Phalanx. When used by Phalanx, his abilities are improved. This crest can't be used by the player.

The Crest of Infinity (無の紋章 Mu no Monshou, roughly "Blazon of Nothingness" in Japan) is a black crest that only appears when all six crests are reunited. Phalanx released Firebrand so he could gather the crests for him (the reason for this is unknown as Phalanx had obtained all the six crests. It can be assumed that it also requires something else) and make the Crest of Infinity appear.

This crest greatly increases the user's powers. When used by Phalanx, he becomes a large monster. When used by Firebrand, he transforms into Ultimate Gargoyle (a purple Legend Gargoyle) and gains the powers of all the crests, making it the most versatile and powerful form in the game. Firebrand also gains the ability to charge his fire attack, which is believed to come from the Crest of Heaven. 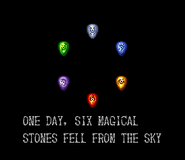 Firebrand with the Crest of Earth (Ground Gargoyle)

Firebrand with the Crest of Air (Aerial Gargyole)

Firebrand with the Crest of Water (Tidal Gargoyle) 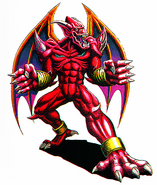 Firebrand with the Crest of Time (Legend Gargoyle)

Phalanx with the Crest of Heaven 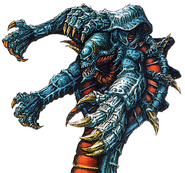 Phalanx with the Crest of Infinity 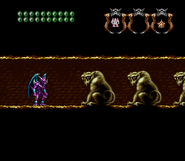 Firebrand with the Infinity Crest (Ultimate Gargoyle)
Add a photo to this gallery
Retrieved from "https://ghostsngoblins.fandom.com/wiki/Crests?oldid=8012"
Community content is available under CC-BY-SA unless otherwise noted.