Dagger (ダガー), also known as Knife (ナイフ) and Sword (剣), is a weapon from the series that is mostly thrown straight forward and is faster than the Lance, usually being able to have up to three in the screen. It is widely considered to be one of the best weapons in the series due to it being easy to use and fast.

The normal Dagger flies straight forward at a fast speed.

The normal Dagger flies straight forward and is faster than other weapons.

With the Golden Armor, Arthur can use the Double Magic (分身の魔法). For a limited period of time, a clone of Arthur appears to assist him in battle. The double cannot be defeated by enemies.

The normal Dagger: It shoots forward as does the Lance and is faster.

With Bronze Armor or Golden Armor, this weapon is upgraded into the Laser Dagger (光のナイフ, "Light Knife"). Just after throwing the normal dagger, it will be engulfed with light, and rushes with great speed, improving its strength and resembling a laser beam.

Like previous games, the Dagger is a fast weapon weapon. With the powerful armor, Arthur can use its magic, which makes a dragon spin around him a few times before flying away.

Lancelot can throw up to 4 Daggers, and his magic with the armor has two dragons spin around him instead of one, which fly away diagonally up, one to the left and other to the right. 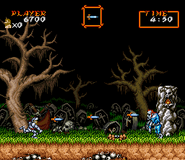 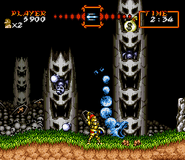