It is said that the world was once divided into two realms, one belonging to humans and one inhabited by demons.  One day six magical crests, each containing power over one of the elements, fell into the Demon Realm (Makai in the Japanese version). The realm erupted into civil war as the demons fought over the crests. Thus, the Crest War raged until Firebrand, the Red Demon (Red Arremer  in the Japanese Version), claimed the crests of Earth, Wind, Fire, Water and Time. Not satisfied that possessing that those Crests alone would end the war, he fought Somulo for the prize of the Crest of Heaven, Firebrand emerged victorious. But the cost of victory was high, as he was mortally wounded.

In that moment a cunning demon named Phalanx took advantage of Firebrand’s weakness and ambushed him, stealing the Crests he’d fought so hard to gain and claiming their power as his own.  Phalanx used this power to summon the Crest of Infinity but, little did he know, the Crest of Fire had been damaged in the earlier battle, (a shard of it was still in Firebrand’s possession) causing it to shatter.  Phalanx was unable to attain ultimate power but still managed to bring an end to the Crest War by setting the Demon Realm ablaze (whether this was intentional or by accident was never explained).  Phalanx would go on to blame the catastrophe on Firebrand, rescue all of the victims and use his newfound popularity to crown himself their ruler.

Meanwhile Firebrand was imprisoned within the Coliseum, healing his wounds and biding his time until he could escape.  After many years he saw his opportunity and broke free.  But his path was blocked by his old foe, Somulo, who had used the remnants of the power he drew from the Crest of Heaven to revive himself.  Barely surviving his rematch with the undead dragon, Firebrand emerges into a world now ruled by Phalanx.  This is the beginning of his quest to reclaim the power of the Crests and take vengeance upon Phalanx once and for all.

And so the story begins.

The gameplay is a mix of standard platforming, with mild RPG elements and occasional side-scrolling shooter sequences. Each level can be played multiple times, and often the player has to revisit a level with new Crests to access areas, items and bosses that he or she could not before. Levels 5 and 6 must be unlocked before being accessible.

The player collects different 'crests' which, when equipped during the game, allow to change into different-ability Firebrands. Some of the possible powers are Earth, Wind and Water. The player also collects talismans, magic potions and other equipment during the journey. 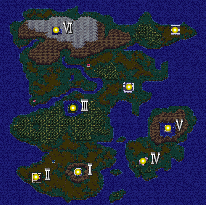