Etruria (エトルリア Etoruria) is a town in the Ghoul Realm that appears in Gargoyle's Quest II. In this town, Firebrand trained every day in the warriors' training center to become a great warrior. One day, King Morock says that Firebrand will receive the Spectre's Fingernail when he is recognized as a true warrior. He goes to the training center and completes the challenge given to him, take Argob's Pot from a high area above spikes.

Firebrand is successful, but when he returns, a dying zombie tells him that the town was attacked by a Black Light and that he must hurry to the king. After passing by the stage and defeating Nagus, Firebrand finds King Morock dying. Before passing away, Morock gives Firebrand the Spectre's Fingernail and tells him to travel West to see King Barr in the town called Gibea, starting his quest.

The Power of Maelstrom costs 5 Vials in this town. 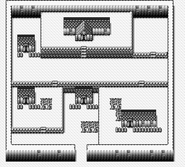 Etruria in the Game Boy version.
Community content is available under CC-BY-SA unless otherwise noted.
Advertisement