Gargoyle's Quest, known as Red Arremer: Makaimura Gaiden (レッドアリーマー 魔界村外伝, lit. "Red Arremer: Demon World Village Side Story") in Japan, is a platform side scrolling adventure game with mild RPG elements from Capcom. It was released on May 2, 1990 in Japan and then in America and Canada in July. The main character Firebrand (Red Arremer in Japan) made his debut in the arcade game series Ghosts 'n Goblins. Gargoyle's Quest was followed by two sequels, a NES game Gargoyle's Quest II in 1992 and Demon's Crest for the SNES in 1994.

Firebrand is a gargoyle who is predestined to be the Red Blaze who saves the Ghoul Realm from the evil wrath of King Breager and brings peace to the land once again.

A long time ago, the Ghoul Realm barely escaped great peril. A large army of Destroyers came from a neighboring universe. The creatures of the Ghoul Realm were no match for the powerful Destroyers. Just when everyone had given up hope, a great fire swept over the Realm, wiping out the Destroyers' army.

Several hundred years have passed and the Realm is threatened once again...

The game consists of two types of areas: an overhead view where Firebrand traverses the Ghoul Realm, either on the world map or in towns, and individual, side-scrolling, battle levels which feature a boss at the end. In between actual levels, as Firebrand traverses the overhead map of the Ghoul Realm, he is susceptible to random encounters like a typical console RPG. He must defeat the enemies in order to return to the overhead-view map. There are also ghouls that can be encountered that spark a small battle level which the player must defeat in order to get past them.

Firebrand can walk, jump (varying heights depending on items obtained), cling to walls, fly (a hovering ability, in actuality) for a period of time (this period is determined by the items the player has obtained), and fire projectiles--the only method of offense in the game. The player starts with one type of projectile; it does not travel very far, and has limited power. Eventually, the player will gain new projectiles, discussed below. Firebrand has a small number of hit points, starting at two and increasing throughout the game based on items or blessings obtained; various enemies and objects drain different amounts of hit points.

As the user progresses, various items are gained which have differing effects. Some items are passive; they increase Firebrand's abilities outright. For example, the Fingernail of the Spectre increases his jumping ability for the remainder of the game, and there are several items that increase the length of time which Firebrand can fly, the final of which allows for him to fly infinitely. There are also items which can be used as needed, such as items to restore health. Additionally, several types of projectiles are obtained throughout the game. All can be offensive tools to defeat enemies, but each has different traits or specialized uses. The Blockbuster, for example, which is the first projectile obtained after the Firebrand's starting projectile, is twice as powerful, travels further, and can break special blocks the player may need to pass. Another projectile temporarily ceates objects which Firebrand can jump from to reach necessary locations. This block-breaking power and other useful abilities leaves a use for such projectiles throughout the game, even when more powerful projectiles are obtained. Projectiles can be selected one-at-a-time from the select menu, as can items such as healing vials.

Firebrand is a gargoyle predestined to become the Red Blaze and take down King Breager.

Red Blaze is the savior of the Ghoul Realm. He was a mutant gargoyle who defeated the King of Destruction years ago and locked him underground.

Rushifell believes he is actually Red Blaze until Firebrand defeats him and rightfully earns the title.

King Darkoan a king of the Ghoul Realm. Usurped by King Breager and thought to be killed by the Destroyers, he is actually imprisoned in his own tower, unable to move from his throne.

Barone Jark baron of the first city you come to; looks like Satan from Ghosts 'n Goblins. Asks you to obtain his Gremlin Stick, which was given to him by King Darkoan. He gives you the Fingernail of the Spectre to get it. He can predict the future when in possession of the Gremlin Stick.

Majorita lives in the Cave of Darkness and tells Firebrand the legend of the Red Blaze.

Barone Bymon has the Candle of Darkness, which is needed to find Majorita in the Cave of Darkness.

A Friend  is a guard you fight for Armor of Guile, Then At Naga's path he tries to give directions.

Zundo Druer fought in the burning town. Guards the portal to the Ghoul Realm. Looks like a giant blowfish and spews forth living flames that float downward.

Four-Eyes this collective creature is the boss at the top of the Tower and is guarding the Gremlin Stick. The four eyes are placed on the walls: two on one side of the room, two on the opposite. They shoot sparks from their irises.

Bellzemos the demon that is holding King Darkoan prisoner in Darkoan's palace. A skeletal demon that flies and can break his body down into bee-like creatures before reconstructing somewhere else.

Zakku Druzer appears in the Desert of Destitution. Resembles a giant skeletal snail with two smaller demon heads below his main head; these shoot projectiles at Firebrand. He is holding the Candle of Darkness.

Rushifell believes himself to be the Red Blaze and holds the Eternal Candle. Once he is defeated, he gladly hands over the candle to the true Red Blaze. His name appears to be a deliberate mistransliteration of Lucifer and is the same character as Lucifer from Ghouls 'n Ghosts (who was renamed Loki in the Genesis version).

King Breager known as the King of Destruction. Wants to destroy the Ghoul Realm. Has failed to do so on a previous occasion when he was stopped by the Red Blaze. The Destroyers is the army controlled by King Breager.

Talisman of the Cyclone

Essence of the Soulstream 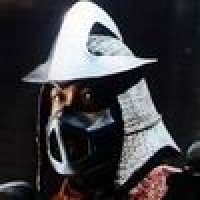