For the Marvel vs. Capcom 3 armor, see Emperor Armor.

The Golden Armor (黄金の鎧 Ougon no Yoroi), also known as Gold Armor and Magic Armor, is one of Arthur's most powerful armors in the Ghosts 'n Goblins series.

In Super Ghouls 'n Ghosts, the Golden Armor is only found in random treasure chests while wearing the Bronze Armor.

The Golden Armor also appeared in Namco × Capcom, Project X Zone and Otoranger, and one of his costumes in Ultimate Marvel vs. Capcom 3 is based on it.

The armor possess the upgrades of the Bronze Armor, but with an addition of magical power to do a third, more powerful attack. It can also take an extra hit before breaking off due to Arthur now holding a shield (however, if hit from behind both the shield and armor will shatter).

For each weapon there is an especific magic power:

The Golden Armor possess more detail then most of Arthur's armors, and has a face plate that covers his mouth and nose. 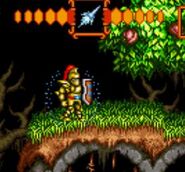 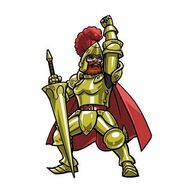 Arthur with Golden Armor in Super Ghouls 'n Ghosts.
Add a photo to this gallery
Retrieved from "https://ghostsngoblins.fandom.com/wiki/Golden_Armor?oldid=7344"
Community content is available under CC-BY-SA unless otherwise noted.