Maximo: Ghosts to Glory, Maximo vs. Army of Zin

Supporting Character
Grim is a friend and ally to Maximo in the Maximo series.

He is voiced by Carlos Alazraqui in the English version and Nozomu Sasaki in the Japanese version.

Charged with looking after the souls of the dead, Grim enjoyed the best job security known in this life and the next... That is, until Achille starts drilling for souls. With retirement seeming inevitable, Grim finds hope in the newly deceased Maximo. Grim makes a deal that facilitates Maximo's return to the Mortal Realm, in addition to ridding the world of the undead menace Achille has wrought, Maximo must gather the souls Achille missed.

In terms of gameplay, soul gathering is very important: collecting 50 souls earns the player a Death Coin which serves as a Continue. If the player loses their lives, they return to the Underworld, the player pays Grim the aforementioned coins to return to the land of the living, but after a few return trips, Grim ups the price; this means that the player must grow in skills otherwise if he returns and is unable to pay Grim, it's Game Over...

As the story unfolds, Grim aides Maximo by sending him to the Spirit Realm to rescue one of the missing sorceresses after Achille slays her in front of Maximo in the Frozen Wastes, and again after Maximo defeats Achille and the real power behind the throne. As Maximo mourns the loss of his beloved, Grim tells the king that his wife, Queen Sophia, is very much alive. Indebted, Grim now travels with Maximo to search for the missing queen.

Maximo vs. Army of Zin

Six months after the fall of Achille, Grim finds Maximo in the outskirts of Mellowmeade Village. The reaper reports that Sophia's soul hasn't turned up in the Underworld... neither have any new arrivals. The mystery deepens as the two friends dispatch a clockwork monster, and Grim examines its power source: a stolen soul - captured and compressed into a spectral battery of sorts. Infuriated over this latest theft, Grim sets off to find the cause while Maximo rushes to Mellowmeade to suppress the clockwork monsters.

After meeting up again in the Hawkmoor Mountains, Grim shares some info with Maximo - the clockwork monsters belong to an ancient menace known as the Army of Zin, medieval robotic soldiers commanded by the mysterious Lord Bane. Due to their interference, there hasn't been any new souls arriving in the Underworld.

Grim is semi-playable in this game. The player must collect souls by defeating the Zin monsters for two things: gathering 50 souls garners a Death Coin, which serve as extra lives (these can also be purchased from the Merchant and Old Soldier), and gathering souls also fills up a meter, which, when fully charged, allows the player to summon Grim to fight in his stead. Grim's scythe is significantly more powerful and he can fly towards enemies to mow them down. Grim hangs around until the soul meter is spent, but the meter can be extended via meter extensions bought from the Merchant and Old Soldiers if you are able to rescue them. 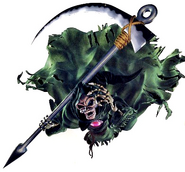 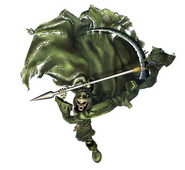