The Human Realm (人界), also known as Human World, Human Land, and Earth, is a world of light habited by humans. This is the place where Arthur and Princess Prin Prin are seen to reside in the intro of each game. Mixing Demon blood and Royal blood from the Human Realm will allow the demons to conquer this light world, as mentioned in Ultimate Ghosts 'n Goblins. Prin Prin is the last person in the realm to possess royal blood, which is why she is sought after by the rulers of the Demon Realm.

The kingdom in the Human Realm which Princess Prin Prin is the ruler has no known name, but as she has been referred to as the "Princess of Hus" in the English version of Ghouls 'n Ghosts, it is implied that Hus is the kingdom. The fact that all human characters have been associated with characters in Arthurian legend (Prin Prin has also been referred to as Guinevere, Lancelot and Perceval appear as playable characters in the Gold Knights series) has lead some to assume that they reside in the castle of Camelot in some capacity, though this has never been in canon material.

In Demon's Crest, Phalanx gains control of the Crests over a period of years. While he is in posession of the Crests he is said to rule both the Demon Realm and the Human Realm and is known as the "White Ruler". The impact this actually has on the Human Realm is ambiguous. Malwous mentions that Talismans are treasures from the humans that were hidden in their world. 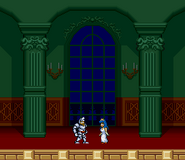