Start a Wiki
The Great Demon Lord Lucifer (大魔王ルシフェル Dai Maou Rushiferu) is a nobleman of the Demon Realm. A towering titan with flaming fur and a fear-inducing gaze, he escalated through the ranks to eventually overtake the emperor's mantle, only to be slain shortly after by Arthur. He is the main antagonist and final boss of Ghouls 'n Ghosts.

The young Lucifer was already crowned king and had built a small kingdom, Loosekeep. From there he ruled his land together with his queen, a huge icy demoness named Verona. They both in turn had good relations with the lord of the western labyrinth, an old sage called Lethe that was said to be as old as the Makai.

Firebrand requested Lucifer's aid. Since it was a request made by Lethe himself, both Lucifer and Verona added their elemental powers to Lethe's candle, which eventually turns into the candle of the ghoul realm, able to dispel any barrier.

Many years later, when humans finally evolved, Lucifer had been lord of the eastern wilderness of the Makai. His domains are very dangerous lands brimming with fierce monsters due to the influence of the deserted castle of Breager, the undead king.

As an impulsive demon lord, Lucifer thought he was destined to be the reincarnation of the Red Blaze, a fabled fire monster said to have burnt to ashes Breager and his minions in the past. However, Firebrand proved him wrong in battle, and in return Lucifer gave him his treasure, the eternal candle.

Several thousand years later, after the fall of the current devil king, Astaroth at the hands of Arthur, the power-hungry Lucifer finally has his chance to take over the mantle of emperor. He enslaves the former emperor Astaroth and prepares his forces to make a comeback attack a few years later. Since Arthur was not present when the first raid arrived, Lucifer took hold of all souls within the castle walls. Just as he arrives, Princess Prin Prin's soul is taken as well, and his horse is disintegrated. Arthur then realizes that the Demon Village has a new ruler, and that both realms have started overlapping once again.

After many hardships, Arthur storms Lucifer's throne room, who is taken by surprise but still fights back from his throne seat. After a fierce battle, Arthur seemingly destroys Lucifer with the magical Psycho Cannon, releasing all souls he had consumed. However, before dying, Lucifer swears that someday he will revive.

In the Red Arremer series, he is both a rival and assist character, first testing Firebrand's resolve and then helping him achieve his true potential as Firebrand, the Red Blaze.

In the mainstream continuity, he is the main antagonist of Ghouls 'n Ghosts, being the source of all events taking place.

His only weak point is his flaming head. However, he often defends it with his tough arms.

As Firebrand, the player attacks from over his throne. He is immune to the magic claw, so use the buster magic instead. Be ready to escape to an upper level when he charges his homming spark with both hands. If you ensure the spark is offscreen when shot, it will dissapear. Latch on the block lined to the left side of his head and you should be able to send a barrage of busters without being hit by the smaller blasts. Since you're on high ground, if you fall you'll lose your life. Touching Lucifer will also kill you on the spot.

As Arthur, the player attacks from under his throne. You have to be careful, since he uses his fingers to shoot deadly laser beams to where you stand. Be quite wary of his feet: If he stomps on you, it's an instant death. His stomping also destroys part of the floor revealing a lava pool underneath, so you should kill Lucifer as quickly as possible. The psycho-cannon is a fearsome weapon, so if you're lucky you can kill Lucifer in less than 3 seconds with a few hits shot right on his face (you will need to jump shooting upwards). The closer you are, the stronger the attack. 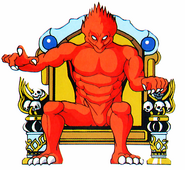 Add a photo to this gallery

Retrieved from "https://ghostsngoblins.fandom.com/wiki/Lucifer?oldid=7501"
Community content is available under CC-BY-SA unless otherwise noted.