Morock (モーロック Mōrokku, "Morlock") is a character from the game Gargoyle's Quest II with appearance identical to Astaroth and Jark, possibly being the same character.

He is the demon lord of the village Etruria, where Firebrand trained daily to become a true warrior. While Firebrand was away fetching the Argob's Pot to prove his worth as a warrior, the deadly Black Light passed by Etruria, killing all habitants. Seeing he had succeeded in his training, Morock granted Firebrand the Spectre's Fingernail, shortly before perishing. 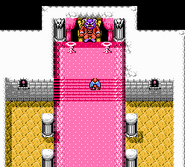 King Morock in the NES version.

King Morock in the Game Boy version.
Add a photo to this gallery
Retrieved from "https://ghostsngoblins.fandom.com/wiki/Morock?oldid=7407"
Community content is available under CC-BY-SA unless otherwise noted.