View source
watch 01:36
We're Getting Mutants in the MCU - The Loop
Do you like this video?
Play Sound

Ghosts 'n Goblins, Ghouls 'n Ghosts, Super Ghouls 'n Ghosts, Ultimate Ghosts 'n Goblins
Princess Prin Prin, usually simply called Princess, is the apparent ruler of a kingdom who is kidnapped in all Ghosts 'n Goblins games she appears in. The princess and Arthur deeply love each other, and when she is in danger, Arthur doesn't hesitate to go to her aid. In some games Arthur can find accessories dropped by her along the way. She is usually rescued in the game's end, after defeating the final boss.

The princess and Arthur are together in a graveyard, when Satan appears and takes her away to the Demon Realm. Despite the dangers, Arthur dons his Knight Armor and bravely goes to the rescue of his beloved princess. The two are reunited after Astaroth's defeat.

Four years later, Lucifer takes the soul of all humans in the kingdom, including the princess, and Arthur must defeat the demon lord to free their souls. Arthur is informed that he can only stand a chance against the demon lord with the powerful Psycho Cannon, and he returns to the first stage to search for it. After Lucifer's defeat, Arthur departs to search a way to exterminate him once and for all before he revives, and the princess stays in the kingdom to repair the damage done by the demons.

Three years later, the kingdom is restored and the princess has a happy reunion with Arthur after being away from each other for so long. However, the reunion is interrupted by Satan, who captures the princess. Arthur once again must pass by hordes of demons to rescue her. Upon reaching the castle, he is informed that the only weapon that can defeat Samael is the Princess' Bracelet, which she wore as normal jewelry unaware of its power until the game's events, and hid it from the demons somewhere on the way to the castle. After returning all the way back to obtain it, Arthur defeats Samael and rescues the princess.

The princess is revealed to be the last human in the world with royal blood in her veins, and the reason for her repeated kidnappings is made much clearer. Her blood is to be mixed with a demon's, thereby giving the Demon Realm control over the human realm. Arthur rescues her after defeating Dark Astaroth.

In Arthur to Astaroth no Nazomakaimura: Incredible Toons, the princess is kidnapped by Satan again while she and Arthur were together.

In Makaimura for WonderSwan, the princess is kidnapped by Azazel and rescued by Arthur.

The princess appeared as a card in the Heroes & Heralds mode from Ultimate Marvel vs. Capcom 3.

Promotional material for the Worlds Unite crossover from Archie Comics included Prin Prin, Arthur, and Firebrand. Despite this, she did not appear in the crossover.

During the cast roll of Ghouls 'n Ghosts and Super Ghouls 'n Ghosts, B.83 W.50 H.89 and B.88 W.58 H.90 (3 years later) appears under her name, respectively. These are the measurements of her bust, waist, and hips in centimetres. Chun-Li from the Street Fighter series shares these same measurements. 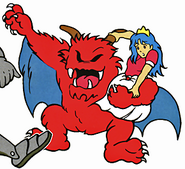 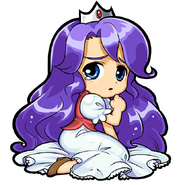 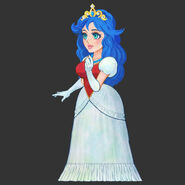