Red Arremer King (レッドアリーマーキング) is a derivation from the Red Arremer species that is much faster than a standard Red Arremer. This type was specially selected to carry revenge on Arthur in Ghouls 'n Ghosts, stopping at nothing to defeat him. Red Arremer Kings have a tail and forehead horn, and wear a battle armor, apparently representing the species' nobility. They avoid attacks by flying and attack by releasing fireballs from their mouth. They can also summon three Blue Killers at a time to attack. 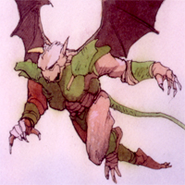 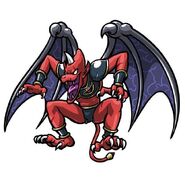 Ultimate Marvel vs. Capcom 3 DLC attire
Add a photo to this gallery
Retrieved from "https://ghostsngoblins.fandom.com/wiki/Red_Arremer_King?oldid=7285"
Community content is available under CC-BY-SA unless otherwise noted.