Sardius, known as the Demon Emperor Samael (魔帝サマエル Matei Samaeru) in Japan, is the final boss from Super Ghouls 'n Ghosts. Much like Astaroth, he has two functioning mouths, but in the case of Sardius the second mouth allows Arthur to hurt him with the Goddess' Bracelet.

The second mouth will shoot ice disks whilst his face shoots a laser beam, Arthur needs to jump on the ice disks dodging the lasers and when the ice stops level with Sardius' face attack it, the ice will break on a timed period so be quick.

In SNK vs. Capcom: Card Fighters DS, Sardius appears in the Action Card "Loki's Rage", where he is misnamed both as Loki and Lucifer in its title and text: "The last boss of Ghouls'n Ghosts, Lucifer. He tells Arthur to look for the bracelet again. Having beat Lucifer, is the bracelet really needed? Thinks Arthur with Sisyphean angst. Oh well, here we go again!". 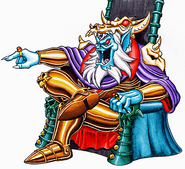 Sitting on the iron throne