"With his armor broken, Arthur is reduced to his underwear." - Ultimate Ghosts 'n Goblins description

Underwear, also known as Naked, Boxers, and Pants, is a state in the main Ghouls n' Ghosts series as well as the Maximo series, were Arthur, Lancelot, Perceval and Maximo lose their armor, ending up in their underwear and becoming more vulnerable.

In these games, Arthur's armor will shatter after just one hit from his enemies, no matter what armor he was wearing (Except for some games in which armors can resist more than one hit). When that happens, he is left in his boxer shorts, and one more hit from an enemy will kill him, turning him into a skeleton. Fortunately, he can still find a replacement armor in a treasure chest. In some games his armor will be restored if he finishes a level while in his underwear. Arthur is also unable to use magic without an armor.

In the Maximo sub-series

In Maximo: Ghosts to Glory, Maximo can buy a different boxer to replace the one he is using. They do nothing other than change his appearance without armor.

In Maximo vs. Army of Zin, more boxers are available, this time each having an extra effect.[1]

In Marvel vs. Capcom 3

In this game, Arthur can wear the Emperor Armor after performing one of his Hyper Combos, but it will only remain for a limited time before shattering, leaving the knight in his underwear again. While in this state, his weapons are weaker and he takes a bit more damage from his opponents. Fortunately, he can go back to wearing the Knight Armor by performing the Emperor Armor Hyper Combo again. Also, each of his costumes has different boxers.[2] 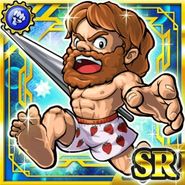