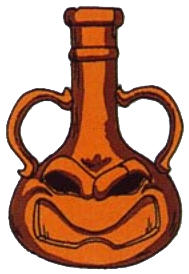 The Vials, known as "Darklord's Pot" (ダークロードの壷 Dākurōdo no Tsubo and 魔界王の壷 Makai-ō no Tsubo, the Vials found in stages) and Souls (たましい, the "currency" inside them) in Japan, are items in Gargoyle's Quest and Gargoyle's Quest II that mainly serve as currency.

There are three types of Vials:

2. Larger pot with a grin, worth four vials.

3. On the overhead view most items appear as a small vial. Just stand over it and go to chk on the menu to collect them.

Argob's Pot (アルゴブのつぼ Arugobu no Tsubo) is the first vial taken in Gargoyle's Quest II as part of Firebrand's training in Etruria. It can't be used as currency and has no other function other than completing his training, making him a true warrior and worth obtaining the Spectre's Fingernail. In-game it has the same appearance of a Vial, but its artwork is different.

A large Vial worth 4 vials

An overworld map Vial containing an item, this one being the Essence of the Soulstream.
Add a photo to this gallery

Retrieved from "https://ghostsngoblins.fandom.com/wiki/Vials?oldid=5637"
Community content is available under CC-BY-SA unless otherwise noted.