Zundo Druer doesn't have many attacks, but the lack of jumping and flying skills of Firebrand early in the game makes its movements hard to avoid. Besides moving around, Zundo Druer can also attack by releasing Melted Irons that slowly move in one direction. The player can follow the boss as it falls and attack as much as possible, just be careful to not sink too low.

Though the boss of the first level, Zundo Druer also appears as a random enemy in the overworld map near the end of the game. But as Firebrand probably obtained Block Buster by the time and has improved stats, it will be less difficult than the first battle. It is, however, immune to Claw. 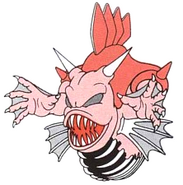